Saturday, 12-01-2019
The WORLD MEMORY CHAMPIONSHIPS is a contest with over 28 years of history, co-founded by the infamous English trainer Tony Buzan, and Raymond Keene. The Championships aim to honour contestants all over the world with super memory through smart brain training methods, though this is still a fresh game to the Vietnamese.
From 2014 and 2015, I have set a journey to study and apply those interesting learning methods, and succeeded in setting Vietnam records, as well as World Records for myself.
In 2016, I officially attended the World Memory Championships in Singapore. Flashing back to that time, I was not familiar with the rules and techniques of the competition, with the scoring and preparation for what was coming. The more experiences I had with the Championships, the more I realised how clever and studious the Vietnamese could be, that we had what it took to win medals or even became the Champion of this intelligent competition.
Upon returning to Vietnam, I then started a concise plan to build a professional training class, at the same time attended arbiter training courses to become an International Arbiter. I also became an arbiter of international competition to familiarise myself with the scoring and organising systems. I could not achieve all these accomplishments without the continuous supports of the leaders of the Central Committee of Vietnam National Record Association and especially the Vietnam General Director, Mr. Le Tran Truong An. Their love and encouragement are the reasons I and my partners could build a team to attend international competitions, where they can experience and learn.
In 2017, Vietnam Record Organization decided to appoint me as the head coach of the Vietnam Memory Team to participate in the World Memory Championships in China and our team won the Team Medal at this event. In the same year, President Tony Buzan and co-founder Raymond Keene decided to appoint me as the president of World Memory Sports Council in Vietnam.
This year, 2019, Vietnam Record Organisation officially organises the first ever Vietnam National Memory Championships. The Organisation also decided to invite the current Memory Champion of the USA – Mr. John Graham – to become the Deputy Coach to train the Vietnam Memory Team. This is a big event to mark our footprints on the international memory playground.
With the desire for students all over the country to be able to train with those amazing learning methods, my partners and I have built an e-learning website www.matmatainang.vn for everyone to access and learn anytime, anywhere. At the same time, we provide free software SuperMe to help you train for the competition. This software models ten disciplines to help you to get used to the format of the competition in an interesting way. You can now download the game from App Store or Google Play Store. Let’s learn and practise consistently and happily to own a strong, creative and intelligent brain, and to become one of the 300 contestants at the first Vietnam National Memory Championships 2019 takes part on the 19th and 20th of October 2019 in Ho Chi Minh City.
What’s more, you have the opportunity to become one of the Vietnamese contestants to compete in the international memory competitions to bring values, prizes and pride to our country.
King regards!
-----
MR NGUYEN PHUNG PHONG
Vietnam Memory Championship Record Holder
(Admitted by Vietnam Record Organisation on 29th August 2015)
World Memory Championship record Holder
(Admitted by World Record Union on 21st September 2016)
Head coach of the Vietnam Memory team
(Appointed by Central President of Vietnam National Record Association, Former Vice Minister of Home Affairs on 21st September 2017)
HONORARY DEGREE OF DOCTORATE IN RECORDS BREAKING - UNIVERSITY OF UNIVERSITY
(Awarded by Principal Thomas Bain on 11th November 2017 in India)
President of World Brain Association in Vietnam
(Appointed by General Secretary Andrew Lee on 20th November 2017)
Representative of World Memory Sports Council in Vietnam
(Appointed by president Tony Buzan on 8th December 2017)
Certificate of Record Quintessence
(Awareded by Dr. Le Doan Hop- Former Minister of Information and Communications, Chairman of the Record Establishing Council – on 26th August 2018)
Arbiter of World Memory Championships (Admitted by World Arbiteer Committee on 4th November 2018) 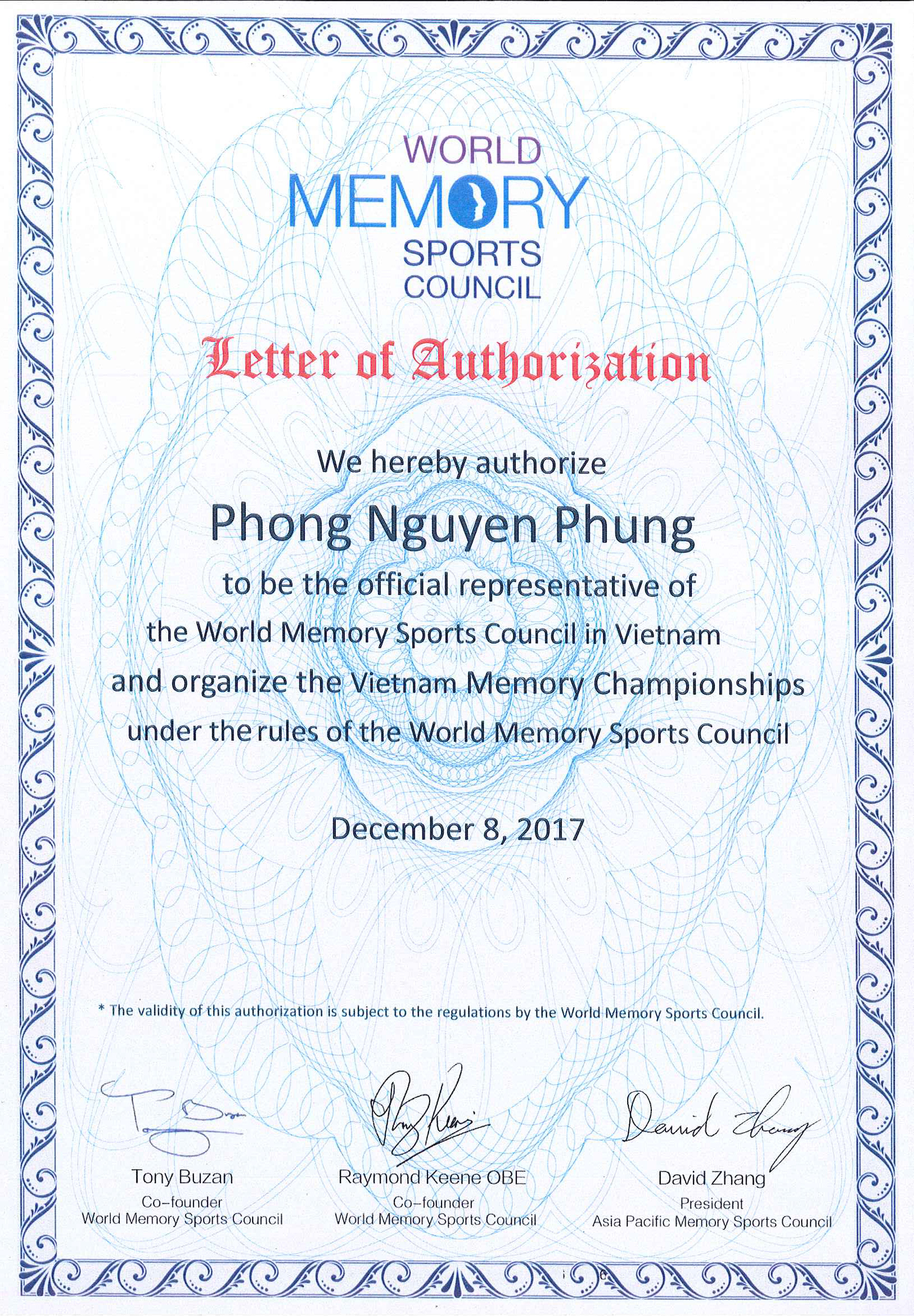